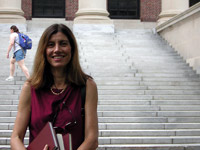 Pascale Torracinta lives in Boston where she works as a freelance translator. She has taught French Literature at the University of Oxford and Geneva. Her essays, reviews, and translations (in literature and the human sciences) have appeared in magazines on both sides of the Atlantic. She is currently Translator-in-Residence at the Villa Gillet in Lyon, where she works on a translation of French poet Yves Bonnefoy’s spiritual autobiography, The Country Beyond. Her recent translation of Sarinagara, by Philippe Forest, came out in the United States in 2009 (Mercury House).