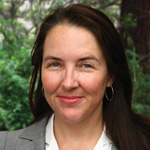 Monica Eppinger is Assistant Professor at the Center for International and Comparative Law, Saint Louis University. She teaches and writes in the areas of property, comparative and international law, national security, and anthropology of law. She earned her law degree from Yale Law School in 2006 and her Ph.D. in anthropology from the University of California Berkeley in 2010.

“On Common Sense : Lessons on Starting Over from post-Soviet Ukraine”, in Studying Up, Down and Sideways : Anthropology at Work, Rachael Stryker and Roberto Gonzalez, eds. (August 2014).